What's it all about?

To Didgeridoo or Didgeridon't, that is the question.

What do didgeridoos, Shakespeare and lawyers have in common? You tell me. All I know is that being an experienced barrister of some standing doesn't necessary qualify you to drive a didgeridoo.

I have always wanted to play an instrument. As a small child I toyed with the Recorder, the Kazoo, triangle and the trombone. But I was never satisfied. No amount of hooting, tinkling or sliding was enough.

Then, as a small adult, I discovered the didgeridoo: a hollow wooden branch into which you vibrate your lips. The result is either a deep, pleasing drone or an ugly sound like and elephant farting.

Over some months I have learned how to drone. I can also buzz, zing, vocalise and produce a sound not unlike a drowning elephant seal.

However, I have not yet achieved the Holey Grail of didge playing, circular breathing (that reader is for another post). But I have tried. In doing so I have learned an important lesson: didgeridoos are dangerous. They are big, heavy and come completely without safety instructions.

Hardly surprising then, that mine has injured me twice. Once, after a particularly long and satisfying blow, I propped mine in a corner only to have it slide down the wall and crush my little toe. I was about to fly out to appear in criminal trials in outback Australia so was a little annoyed. But I persevered, limped into court and got away with it (I'm at an age when limping into court is acceptable, if not compulsory).

Determined not to let the stick injure me in that way again, it promptly found another way. Or should I say I found another way: this time tripping over it after another long and satisfying blow, a blow of such sublime quality I celebrated it with a few beers and a wine or two. The result was a sizable chunk of bark off the old shin bone.

Sex with Fruit and Other Foods: an email from the year 2050 - and a cynical attempt to increase traffick to this wonderful piece by sexing up the title. 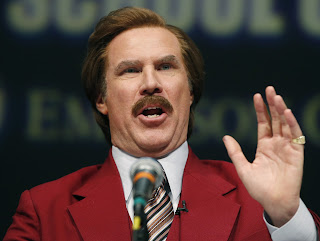 I’ve got good news and bad news. The good news is there is lots of sex in the future; the bad news is not much is between humans.
Once upon a time the best sex you could get was the kind between consenting adults. The kind you had to work at getting and that carried the potential for life changing consequences, like enduring partnerships, love and children. The messy kind that was breath-taking, heart-thumping and mind-cleansing. The kind that fathered pride, pleasure, passion and sometimes, less pleasingly, embarrassment and shame.
Then came technology. The same technology that crammed the world into your phone and killed everything from newspapers to conversation. It has just about killed good old-fashioned sex too. Replaced all but the shadow of it with virtual sex of a wondrous but barren and dangerous kind.

How to Greet a Killer 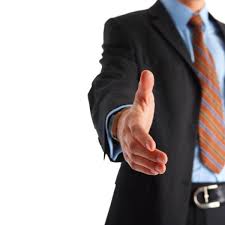 How do you greet a killer? Law school does not prepare you for it. Nor does the bar practice course or pupillage. For most barristers this is not a deficiency in the learning because the likelihood of acting for a killer is small. However for criminal defence barristers, especially those who achieve some seniority, the likelihood becomes certainty.

What do you do when you finally meet that rarest of beasts, the human being who has taken the life of another.

The Worst Job I Ever Had: lessons from the man without Latin. 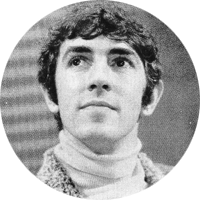 He was crude, abusive and cruel; intelligent, creative and quick. All this clicking and sliding, burning and sparking within his tall and beautiful frame. He spoke just enough or incessantly and his timing was perfect. He smoked, was frequently drunk and died too early, one of the funniest men that ever lived.
Unlike Dudley Moore his diminutive sidekick of many years, Peter Cook never courted Hollywood fame or fortune. Instead he revelled in the sheer pleasure of his pursuits: anarchic satire, exploring the absurd and making others laugh. He has breathed life into some weird and wonderful characters: Sir Arthur Streeb-Greebling, EL Wisty and Martin Trout for example. He was especially kind to the legal profession giving us the iconic and timeless ‘Biased Judge’s Summing Up’ and ‘I could have been a judge but I never had the Latin’. 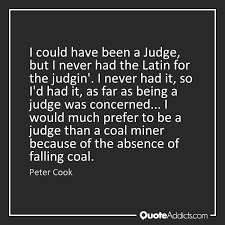 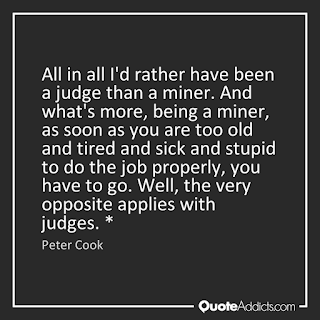 Judicial Regalia or Not.

What you lookin' at Pal? Never seen a fuckin' judge before?

The World's First Selfie: how I invented the toss-shot and what came next.

A typical early 'toss shot'. It is 32 years since I invented the selfie. Little did I know how the technique would sweep the gl... 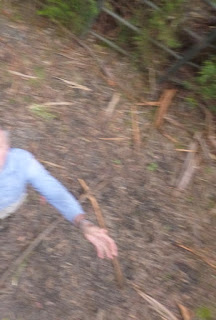 My legal thriller. Read it. 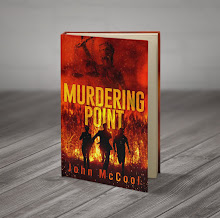